The Whites of Kenya

The Whites of Kenya

It is approaching lunchtime and I am at the Kenya Regiment club in central Nairobi. It is an oasis of calm as the bustle of this huge African city plays outside. The bar is filling up as some of the old vets of this disbanded regiment arrive for the traditional Friday curry club. This inevitably starts with a few rounds at the bar. It is a predominantly white crowd, and this is one of the hot spots to find some of the remaining whites of Kenya. Our host and chairman of the club, George McKnight is nowhere to be seen. He is battling it out in a local court, as yesterday he was apprehended for approaching a roundabout in the wrong lane. Although a bribe of about 1000 Shillings ($15) could have got him off the hook, he decided on principal to go to court. This however, will cost him dear, as eventually he pays 15,000 shillings in fines.

Police corruption is sited as one of the few downsides of life here, as the life for the white population is very stable and quite comfortable. They enjoy all the hedonism you need and relations with the black population are generally positive.

The sense of wellbeing has been somewhat tainted of late by the high profile murder case against Tom Cholmondeley, a white landowner who was accused of shooting a black poacher. The charge was eventually reduced to manslaughter, but this and the unsolved murder of Joan Root, a white Kenyan conservationist, makes the white community a little nervous.

If you look at neighbouring countries and see how life is there for the whites, there is no question Kenya is relatively calm. In South Africa there has been an escalation of racial tension and in Zimbabwe the remaining whites must feel somewhat uncomfortable, as virtually all the white farmers have been forced to leave. Indeed, Kenya has welcomed some of these white refugees, inviting them to come and set up here.

Although Kenya’s white population is now around 20,000, it is said that of this only around 5,000 are the old colonial people, who were here at independence in 1963. There is a vibrant young community. I was at the Karen Country Lodge for the weekly disco, where the young whites dance and drink the night away.  The car park is full of SUVs – and never forget one attraction of Kenya is the lack of drink driving laws: you can drink as much as you like and still drive legally. But don’t commit any other minor traffic offence, or you could be stopped by the police. There has been a notable increase in marriages amongst the young white population as many children are returning to Kenya after experiencing life abroad, and in particular in the UK.

Many of the events I photograph here feel wonderfully familiar to this English photographer. I go to the Friday market of the East African Women’s League in Nairobi. It has all the features you expect at the WI in the UK: home baking, locally grown fruit and veg, and of course tea and chat. They have a different aim though: to raise money for local charities and projects. 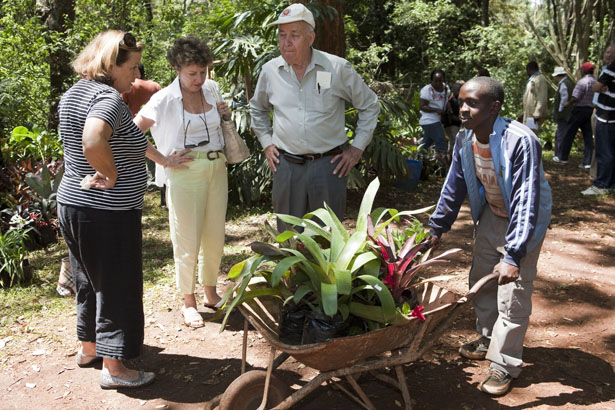 On another morning, I attend the Kenyan Horticultural society, where various white nursery owners are selling the most amazing display of plants, at what seems to me to be bargain prices. There are golf clubs, bowling and of course the races. On the Sunday of my stay I am off to the Nairobi racecourse for the hotly contested Kenya Derby. This year it is sponsored by the British betting company, John Power, and the man himself is there, taking the bets with his usual banter. All the trappings you expect at a society event are in evidence, and it is patronised by a large contingent of Kenyan whites. The Muthaiga Club have a tent, and if you glanced round here you could so easily be at Ascot or Goodwood. The following day I drive out to nearby Lake Navaisha and meet two classic white Kenyan couples. First, Tony Seth-Smith and his wife Sarah. Tony was originally a “ White Hunter” and started organising hunting parties in the 1960s, although when hunting was banned in 1977 these stopped overnight. However, Tony had seen the potential of photographic safaris, and has only recently retired from this after a long and successful career. With a stunning house overlooking the lake the couple now dedicate much of their lives in running, in effect, a private wildlife conservation area. Just down the road is Lord Andrew Enniskillen and his wife, also called Sarah. They too tend their estate with great care and the game has returned to healthy levels after their 27 years of managing this land. They also used to farm, but last year’s serious drought forced them to sell their remaining 50 odd head of cattle. Lord Enniskillen has also had a life in the business world but has now retired from this. They receive some income by renting out their charming cottage and providing full board accommodation for discerning tourists. Indeed in the evening you are quite likely to dine with members of the British aristocracy, as Andrew and Sarah invite their guests to eat with them. Ironically, Andrew feels that being a hereditary Lord in Kenya is an encumbrance as the impression is given that he is automatically very wealthy – something he strenuously denies. Both these couples hold full Kenyan passports. Around the time of independence in 1963 the question of whether to keep the British passport or opt for a Kenyan one was a big point of debate, as dual citizenship is not allowed. They have a strong sense of pride and responsibility around their citizenship. There is no question that the remaining whites, especially the British, are a glorious hangover from the colonial past, but also enjoy being part of the modern Kenya. I am taken to the airport by an articulate Kenyan, called Joseph and ask for his feeling about the whites. He respects the management skills that were brought by the colonial power to Kenya, saying that they were, and still are very good farmers. His take on the recent infamous murder cases was somewhat confused, and was convinced that Cholmondeley was indeed a murderer. As I pay the driver the 1300 shillings, I am reminded that, like or not, the British presence is still much in evidence, even naming the currency after a coinage long since lost back in the UK.