The British Library is doing an exhibition on the theme of ‘gothic’ and they asked if I would like to attend Whitby Goth weekend in late April. Of course I would, and here I am three months later wandering around the foggy harbour, taking portraits of the various people who are starting to show up for this now established festival. Whitby is like the official home of the Goth movement in the UK, first because it has the Dracula connection and also the many ageing Goths have come and settled here. One thing I learn quickly is that there are many variants of Goths. There is the punk tendency, the glamour Goths, the New Romantics, and most recently arrived – and a perhaps now the most dominant genre – Steam Punk. Inspired by the likes of Jules Verne, Steam Punks wear stiff Victorian clothes, with accessories like goggles and assorted eccentric paraphernalia. Steam Punk is so popular; they could almost do with having their own festival. A tour in the evening reveals quite a few pubs that are Goth hot spots: the Shambles and the Little Angel for example. Goths will tell you it’s all about the music, and on the Friday morning I go to the Spa, which is the main venue for the two nights of festival music. During the day stalls sell all things Goth. A stand sells cup cakes, complete with black icing and skulls. You can buy an elaborate wedding cake decorated with any Gothic motif you wish. Then there are the clothes – mainly black of course – along with a popular Goth bring-and buy-sale. You can buy Steam Punk goggles and even genuine antiques, such as Victorian funeral cards. The Spa is really the Festival HQ. You could sit here all day Goth- watching and never get bored. We think the young would dominate the Goth movement, but this is not the case. Many Goths, especially those that have been coming for over twenty years are now pensioners.

Down in town, the Goths behave like anyone else who visits Whitby: they eat fish and chips, have an ice cream, and take photos of each other. Their favoured tea room, Sherlocks, serves a delicious afternoon tea. One restaurant offers a free meal for the best dressed Goth couple. Perhaps the biggest attraction is the obligatory walk up the steep steps towards the Abbey. But this is where the Goth weekend takes an unexpected twist, for up there, behind the wind and rain battered gravestones lurks another tribe: camera club photographers. It seems if you want to win a camera club competition, a good bet is to depict a Goth in the graveyard. This heady mix of cultures becomes a bit of bun fight. The official festival people have already warned me that many of the people taking the steps up to the Abbey are not real Goths, it is more like a fancy dress parade. Anyhow, both parties seem quite happy with the encounter, and many thousands of photos are taken.

By the time the Spa venue opens in the evening for the programme of Goth music, the fancy dress wannabes are nowhere to be seen. Here we have the full parade of the loyal Goth fans who have been attending the festival for the last twenty years. I saw many of the same Goths on the two music nights, most wearing entirely different outfits. Goths don’t really go in for a lot of dancing, they are wearing too many clothes for starters – weighed down by their own outfits. The exception to this rule is in evidence when headline band – The New Model Army – takes to the stage on the Saturday. Although not strictly 100% Goth, they are much admired, and their underground status counts for a lot. Bang in front of the band, a nucleus of 25 guys, stripped to the waist, are ready to dance. Without their outfits, it’s difficult to identify which genre they are, but one suspects they are variants on the theme of punk. And boy do they dance, throwing each other around in a big sweaty, physical mosh. Sunday afternoon sees the annual Goth football match, held at Whitby Town’s football ground. This turns out to be highly entertaining. The cheerleaders try and intimidate the opposing team when they get anywhere near the Goth goal. The Goth team is well and truly beaten by at least 7 goals, although no one seems that interested in the score. The Goths do finally score a goal – a penalty – sending the crowd into a brief moment of celebration. The Goth supporters enjoy their team’s miserable display, and it seems that being thrashed is a tradition and a great excuse for much black humour. After the main match, the Goth women have a penalty shoot-out against various local kids, and anyone else they can muster. Sad to say, they also lose. Sunday night sees the traditional Sexy Sunday disco at the Met hotel. I have never seen a more diverse assembly of bizarre costumes on a dance floor. Leather and flesh are much in evidence, and trans-gender Goths have their moment of glory. 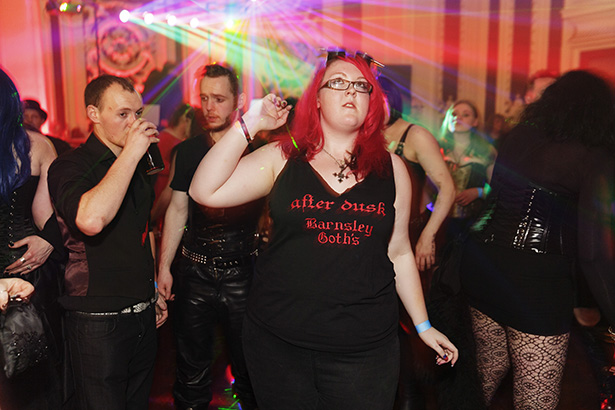 An expectant mother at the dance has the phrase ‘Baby Gothling’ inscribed across her swelling tummy. The dance is a great way to end a most memorable weekend.

Everyone will be back later this year for the official twentieth birthday of Whitby’s Goth weekend, a few weeks after the British Library show opens.