Away from St Helier, you might not realise that May 9th is a special day in the Jersey calendar. Unlike Guernsey, where flags flutter from virtually every house, tree and telegraph pole across the island, Jersey seems to take a more low key approach. In some of the quieter and more remote settlements, aside from the occasional bed of strategically planted red and white geraniums, there is little to indicate the significance of the date. But flags play a very important part in the Jersey Liberation Day celebrations. On May 9th 1945, at 7.18am, British soldiers disembarked from HMS Beagle and went to the St Helier Harbourmaster’s Office and the Pomme d’Or Hotel – facing the harbour – where they ran up the Union Jack and Jersey flags. Every year, this symbolic event is re-enacted, to great cheers from the crowd in Liberation Square. The re-enactment follows the formal service in which speeches are made, hymns sung and prayers intoned by ministers of the church and state, all kitted out in full ceremonial regalia. Around the square various stalls offer sea food, spit roast pork, ice cream, cup-cakes, burgers, pancakes and Jersey Wonders – sweet and sticky cakes a bit like doughnuts. You can also buy wartime fare – like corned beef hash – from vendors dressed in 1940s outfits. Wine, beer and cider flow. Such abundance makes the address given to the States of Jersey by John Gallichan, Connetable (or Mayor) of Trinity, relayed to the large screen on the square, all the more poignant. John was 21 months old on Liberation Day and he talks movingly of the privations his family experienced. Things got worse as the war neared its end, with the Germans exporting the bulk of local produce and cattle to feed their troops, leaving the islanders at starvation point. John describes tea made from powdered sugar beet, parsnip coffee and the family’s elation when the precious Red Cross parcels started to arrive. Back on John’s home patch, in Trinity’s flag-bedecked parish hall, the feasting continues with a Liberation Day supper. Ninety six people have each paid £12 to attend, with profits going to the Red Cross. The supper is prepared by ladies of the parish, who bustle about in crisp white aprons. Events unfold with military precision. Bowls brimming with peas and Jersey Royal potatoes are placed in five hostess trolleys that warm the plates and platters ready for the arrival of the roast chickens. On cue, the ladies emerge from the kitchen with tureens of steaming vegetable soup for each table. As the diners enjoy the first course, home made rhubarb tarts –which will be served with thick Jersey cream – are lined up to cool on a nearby table. After the meal, John thanks the cooks and leads a sing song, shouting out numbers from the parish song book. This is also a brisk, no nonsense affair, just one verse from each of the old favourites – Pack up your Troubles, Daisy Daisy, There’ll be Blue Birds. The swift transition between songs is accomplished smoothly thanks to the excellent pianist who moves from key to key, and melody to melody, with ease. The event reaches a Last Night of the Proms-like climax in a hearty rendition of Rule Brittannia and There’ll always be an England, accompanied by much waving of Union Jack hats. The church clock strikes 10 and the diners emerge from the brightly lit hall into the dusk, as pipistrelle bats flicker around the windows. The imaginative events organized by Jamie Walton for the International Music Festival appeal to a broader spectrum of music lovers. A musical walk along the rugged coastal path above St Brelade’s Bay attracts a good crowd, most with waterproofs zipped up against the strengthening south westerly. Bearing a chair and stand with sheet music attached by clothes pegs, Jamie goes ahead, trying to find sheltered spots where the violinist and accordion player can perform without having their music lost to the wind or their fingers seizing up in the cold. 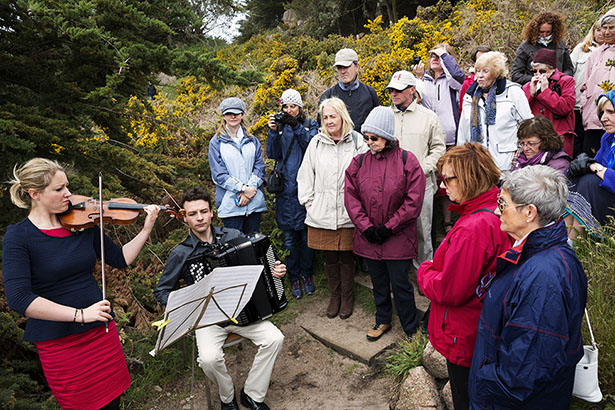 Challenging in a different way, another novel musical event is held in the old German Command Bunker at Noirmont. Leaving the sunshine, the audience files down into a chilly, echoing, underground chamber.  Virtuoso musicians Michael Collins  (clarinet), Boris Brovstyn (violin) and Michael McHale (piano) perform Poulenc’s Clarinet Sonata and A Soldier’s Tale by Stravinsky. Intricate works based on The Soldier’s Tale, by two young composers from the Jersey Academy of Music, are given the same serious attention by the musicians as the classic pieces. Both young people seem delighted and rather awed by their reception. The youngest’s blazer and school tie suggest he has been allowed to miss double maths for this special occasion.

Readings by local authors are interspersed amongst the different sections of the Stravinsky. 90 year old Eric Walker, one of the Tommies who helped to clear mines from the newly liberated Channel Islands, reads a poem about a mine clearance soldier, Sapper Onions, who died on Alderney:

‘Here buried lies
the shattered corpse of but a boy,
who gave his life to make your land safe.’

Soldiers like Eric were overwhelmed by the rapturous welcome they were given as they arrived in Jersey back in 1945. Although the number of people who experienced and can remember the Liberation is in inevitable decline, it has been marked every year since with dances, concerts, meals and parties across the island. Perhaps the most sombre event, fittingly held at the crematorium, is the memorial service commemorating the hundreds of forced workers brought into Jersey by the Germans to build fortifications. Tellingly, only one survives: Emile Boydens, a Belgian, who still lives on the island. And it seems fitting that, in many of Jersey’s celebrations, food takes centre stage. A splendid Liberation breakfast of bacon, eggs, beans, tomatoes, coffee, orange juice and toast is held for fifty people at the Royal Hotel in St Helier, beginning at 7.18 am exactly. For Leo Harris, the breakfast organizer, Liberation actually began on May the 8th. He was living in an area that was always thronged with Germans, but on that day he remembers looking up and down the street, astonished that they had all disappeared. He points out a frail-looking elderly lady, who sits chatting with friends. ‘She was one of the prettiest girls on the island. A blonde, and she was always being whistled at by the Germans. They would come up to her at the Havre des Pas lido and she would toss her mane as if to say ‘No chance!’’ But, although islanders are reticent about this, plenty of people did cooperate with the invaders. One estimate is that 900 children were fathered by Germans on Jersey. It is said that those women who went with German men were punished and shunned once the war came to an end. It follows that there must be people living on Jersey who have mixed feelings about Liberation Day.

One breakfaster proudly points to his lapel: all school children on Jersey were given a medal to commemorate the Liberation. Every year since 1945, at 11am on Liberation Day, he stands on the same spot on Conway Street to watch the bands, troops and dignitaries march past.  This is exactly where he stood 68 years ago, when soldiers threw chocolate into the crowd, to the delight of the hungry children.